Recently I watcehd Devil at the Crossroads, a very interesting biopic about the early delta blues singer, Robert Johnson. I happened to also be reading Bob Dylan’s ‘auto-biography’ entitled Chronicles: Volume One. Given Johnsons influence on Dylan, I figured I would point out some direct and subtle ways that Dylan took from Johnson after listening to him recently more thoroughly (and thoroughly enjoying him!).

Johnson was an extremely enigmatic character, and also died at 27 (re: 27 club), so for those who are simply interested in a good story, definitely check it out, it’s well done. 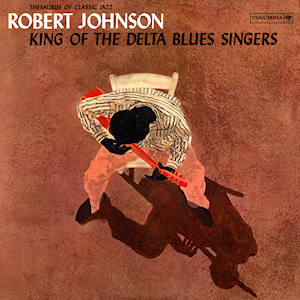 By 1961 Dylan had been in New York City (Greenwich Village) and thoroughly embedded in the Folk scene for about about a year. He was still young, only 20, when he was discovered by John Hammond of Columbia Records, with whom he record and release his first album that same year. The story goes that Hammond let Dylan listen to an essentially forgotten compilation of Robert Johnson songs on an  album that Columbia was re-releasing later that year called King of the Delta Blues. Dylan was given this album, and in his own words:

Before leaving that day, he’d [Hammond] given me a couple records that were not yet available to the public…[one] was called King of the Delta Blues by Robert Johnson…I’d never heard of Robert Johnson. Never heard the name, never seen it on any of the compilation blues records. Hammond said I should listen to it, that this guy could “whip anybody.” He showed me the artwork, an unusual painting where the painter with the eye stares down from the ceiling into the room and sees this fiercely intense singer and guitar player, looks no more than medium height but with shoulders like an acrobat. What an electrifying cover. I stared at the illustration. Whoever the singer was in the picture, he already had me possessed.

From the first note the vibrations from the loudspeaker made my hair stand up. The stabbing sounds from the guitar could almost break a window. When Johnson started singing, he seemed like a guy who could have sprung from the head of Zeus in full armor. I immediately differentiated between him and anyone else I had ever heard. The songs weren’t customary blues songs. They were perfected pieces–each song contained four or five verses, every couplet intertwined with the next, but in no obvious way.

The record that didn’t grab Dave [Van Ronk] very much had left me numb, like I’d been hit by a tranquilizer bullet…Over the next few weeks I listened to it repeatedly, cut after cut, one song after another, sitting staring at the record player. Whenever I did, it felt like a ghost had come into the room, a fearsome apparition…If I hadn’t heard the Robert Johnson record when I did, there probably would have been hundreds of lines of mine that would have been shut down (Bob Dylan, Chronicles: Volume One, 280-288).

Dylan’s Use of Robert Johnson

I know Bob Dylan’s corpus like the back of my hand. And for anyone who doesn’t know me, to call me a dylanphile is an understatement. Bob Dylan has profoundly shaped my identity and self; he is someone that I have lionized not only for his incredible music but for his mysterious personality: a leader and a martyr, a hero and a nobody, a cultural genius and also the guy next door. I have identified with Bob Dylan’s journey personally, and he is someone that has been embedded into my soul for the past fifteen years. That said, after listening through King of the Delta Blues in much more in depth for the first time, I was shocked and almost disappointed by how much Dylan borrowed from Johnson. Of course, that doesn’t take away from Dylan’s genius in his own right, but such is the way with the evolution of music. Perhaps this speaks more to the influence of Johnson, who indirectly influenced generations of blues singers (leading to electric blues and subsequently rock and roll), and also directly influencing dozens from Eric Clapton, and Led Zeppelin, to the Rolling Stones and the Grateful Dead. Here are some of the more explicit similarities I picked up.

Dylan’s use of Johnson’s falsetto style and rhythmic structure in his Quit Your Low Down Ways (1962) on this verse is almost identical to Johnson’s verse on Terraplane Blues and Stones in my Passway.

“She’s a Brown Skinned Woman” seems to be taken directly from Robert Johnson.

Johnson’s Lyrics is: “Ah, the woman I love, took from my best friend, Some joker got lucky, stole her back again,” then he proceed to the refrain “you better come on, in my kitchen,” which is also almost identical in melody and structure to Dylan’s in Pledging my time. Dylan’s lyric runs as follows: “Well, they sent for the ambulance, And one was sent, Somebody got lucky, But it was an accident: Now I’m pledging my time, To you, Hopin’ you’ll come through, too.” In fact, the entire song’s vocal pattern/structure is almost identical.

This one is is seemingly the entire content and structure of the song. If obvious that Bob Dylan was fascinated with the “Cross road” myth, and saw himself somewhat fulfilling that to a certain extent. While there’s autobiographical material in Down the Highway, “She packed it all up in a suitcase, Lord, she took it away to Italy, Italy” (his then girlfriend Size Rotolo studying abroad in Italy), it seems the concept is derived from Johnson’s persona.

There are definitely more, explicit, subtle, and otherwise, but I think it can be seen the impression that Robert Johnson left on the young Bob Dylan, who at that time had been enamored with Woodie Guthrie and was in some sense emulating his persona. Johnson gave Dylan a new persona, new song structure, and new thematic elements to incorporate and build into his own music. While Dylan’s first and self-titled album (almost entirely folk covers) did not make a big splash, his follow up record The Freewheelin’ Bob Dylan, quickly became a chart topper and thrust the young song-writer into the “voice of a generation.” A title, that he has spent the last fifty years trying to shake off. And well, the rest is history.